Often contrasted with Rookie Rush, Mega Zoo is an "unofficial" archetype that mostly ignores digivolving. However, unlike Rookie Rush,  it favors hard casting a few memory-expensive Digimon to swarm the field with a lot of cheap Digimon. While on paper it seems inefficient to give your opponent so much memory to play only one or two cards a turn, the archetype has a lot of strength and has several well-performing builds in the 1.5/BT3 meta. In this article we will go into detail on what are the traditional characteristics of Mega Zoo as well as some new cards being released in BT4 that support the archetype.

Since Mega Zoo is an unofficial archetype, the lines can be a bit blurred on which decks are really Mega Zoo. Additionally, unlike more official archetypes, can be pretty color agnostic ( though some colors fit the archetype better than others ). However, it usually follows the following restrictions:

Few rookies and No Champions 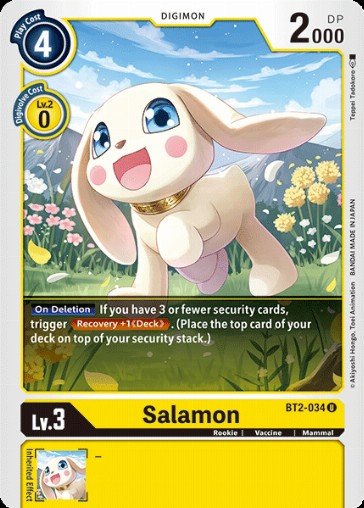 Compared to most decks, Mega Zoo isn't really dependent on seeing their rookies ( especially since you normally don't have any champions you plan to digivolve on top of ). Part of the power of Mega Zoo comes from having such a high ratio of high-DP Digimon that could be living in your Security. If your opponent is afraid to swing into your security/lose their Digimon to a 10k DP+ security, then the deck can be passively defensive in its own right. If your opponent doesn't swing, then it gives you more time to set up and build your own resources. However, the free card cycle/attack that rookies offer is still too alluring to not include a couple in your deck( usually between 4 and 8 ). In general, you want rookies that can generate draws, such as tapirmon ( https://digimoncard.io/card/?search=BT2-070 ), attacking pressure, such as Veemon ( https://digimoncard.io/card/?search=BT3-021 ), or defense, such as Salamon ( https://digimoncard.io/card/?search=BT2-034 ). 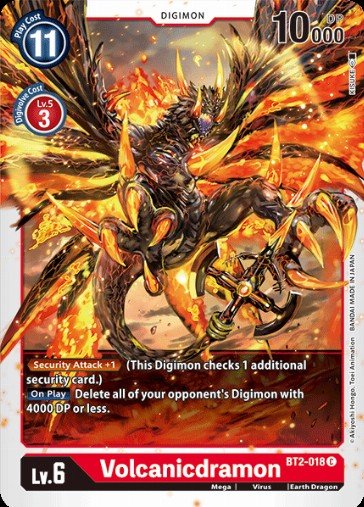 On play Megas aren't the only Megas to consider though, Vanilla Lv. 6 Megas, such as the starter deck Phoenixmon ( https://digimoncard.io/card/?search=ST1-10 ) are attractive for their relatively cheap memory cost as well as their higher than average DP. Blocker Megas, such as Craniamon ( https://digimoncard.io/card/?search=BT3-075 ), is also attractive since they can add another layer of defense for the deck.

Though these Lv. 6 Megas are strong all by themselves, they become even more powerful when you bring Lv. 7 Megas into the mix. 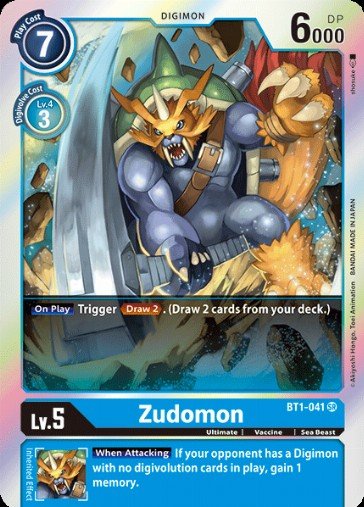 However, the DP gap between Ultimates and Megas is particularly large and can greatly decrease the average DP of your security and, since you are likely using many different colored Megas, you could still be stalled without a Mega to evolve your Ultimate into. I still highly recommend experimenting with Ultimates in your own brews and seeing what ratios ( if any ) work for you.

As a whole, since BT4 introduced the new "digi-burst" keyword, a lot of the cards released in BT4 revolve around traditionally digivolving your digimon and then trashing its sources to get a powerful effect. Which, uh, Mega Zoo doesn't tend to do. However! There are still some new Megas and additional support that comes from this set that a Mega Zoo deck can definitely take advantage of. 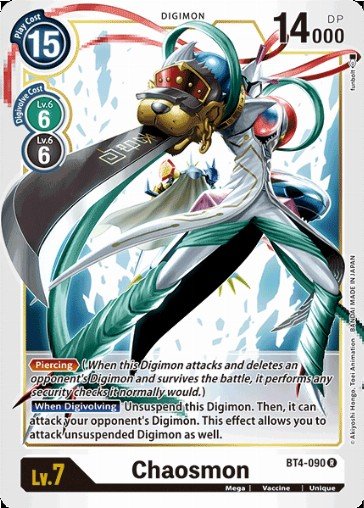 The most obvious new support we get in the set comes with the pair of new Megas, Chaosmon ( https://digimoncard.io/card/?search=BT4-090 ), and Chaosmon: Valdur Arm ( https://digimoncard.io/card/?search=BT4-091 ). Immediately, these Chaosmon cards give both green and yellow their FIRST Lv. 7 Megas ( which is kinda crazy that it took so long for these guys to get level 7s ). This gives cards like Magnadramon and Puppetmon ( that were already common Mega Zoo cards ) a huge power boost if they survive the turn after they're played. This is doubly true for puppetmon and other green level 6's because they are able to digivolve into either Chaosmon. 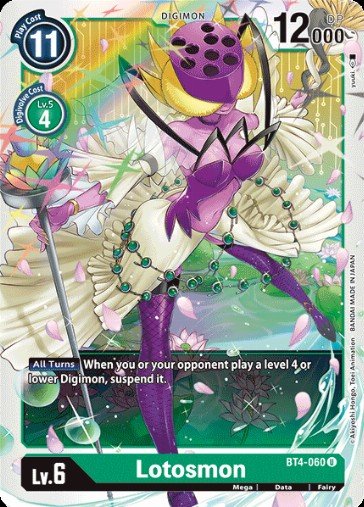 Talking about other green level 6's, BT4 also introduces Lotosmon ( https://digimoncard.io/card/?search=BT4-060 ). Lotosmon has an effect that causes all lv. 4 and lower Digimon to be played in rest mode if they are hard-casted. This can be an excellent floodgate against decks like rookie rush and can really capitalize off your opponent stalling on their digivolve chain. There are also two more Megas left from this set that I think at least deserve a mention, WarGreymon ( https://digimoncard.io/card/?search=BT4-048 ) and DanDevimon ( https://digimoncard.io/card/?search=BT4-088 ). WarGreymon is already showing itself to be a powerful card in traditional yellow builds and, though hard casting him for 12 may be steep, he can apply a LOT of pressure/board clearing potential. If he survives to your turn, he can swing, restand/give something -6k DP, gain card advantage from your security, and then digivolve into valdur arm. DanDevimon on the other hand can be really obnoxious to deal with. He can apply burn damage once per turn if your opponent leaves him up and, if they decide to delete him, they have to discard two cards from their hand. This all leads to DanDevimon gaining a LOT of advantage if played at the beginning of the game. 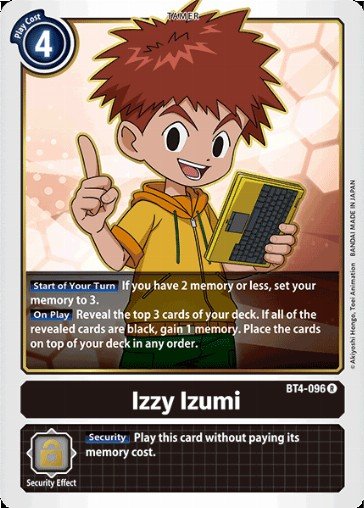 The first card I think comes to my mind is the new Izzy Tamer (  https://digimoncard.io/card/?search=BT4-096 ). Though the memory gain from him can be good if you hit it ( and starting at 3 memory every turn as well ) the more important part is looking at the top 3 cards of your deck. Mega Zoo doesn't have a lot of cycle due to its lack of digivolving so being able to look at your top 3 cards and rearrange them can help you properly set up for your next turn.

There are also two new extra cards that immediately catch my eye. The first is Blinding Ray ( https://digimoncard.io/card/?search=BT4-104 ). At the cost of one of your security, this card can give you two extra memory. This can be incredibly helpful against decks that try and memory choke you/prevent you from getting more then 1 memory on your turn. The other is Final Zubagon Punch ( https://digimoncard.io/card/?search=BT4-109 ). As long as you have a Digimon with 13k or more DP ( which all of the Lv. 7 Megas have ), this card gives that Digimon +3k DP, Security Attack+1, Reboot, and block until the end of your opponent's next turn. This allows your Megas to swing hard while still allowing them to act defensively during your opponent's next turn. 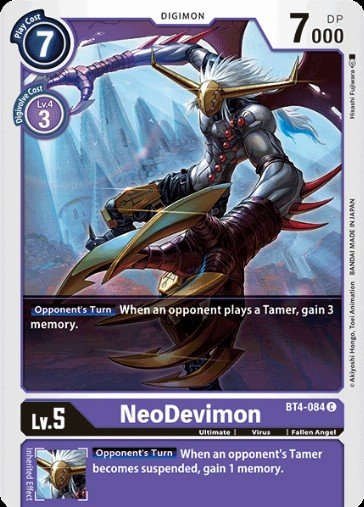 Mega Zoo is one of my favorite archetypes to not only play but also build for. The archetype is incredibly open-ended and there are a lot of cool/powerful combos that you can build into your own brews. If you want to see my Mega Zoo deck profiles and gameplay, make sure to subscribe to my youtube page here:  https://www.youtube.com/c/TheEgman . Additionally, here is a link to my favorite BT3 Mega Zoo List: https://digimoncard.io/deck/?deckid=220 as well as my decklist page to see the rest of my decklists: https://digimoncard.io/deck-search/?&featuredBuilders=&offset=0