Great Legends is only a few weeks away from dropping and, with it, we get the Great Legends Power Up Pack! This pack, which was released originally released in Japan to celebrate the 1 year anniversary of the game, contains 6 brand new promo cards. Additionally, unlike Japan getting this pack in their BT5 meta, we will immediately get these cards to power up new Great Legends archetypes/cards! I think this will definitely cause a welcomed mixup for the English BT4 meta as well as boost a couple of lackluster archetypes to be competitively viable!

Two quick notes before we talk about the cards specifically, First, to obtain these packs, they are given out by buying a box of BT4 from your local card game store ( similar to how dash packs were given out for 1.0/1.5). These packs additionally have 2 cards from the card pool of 6. For more information, please check the official website: https://world.digimoncard.com/products/pack/ver4.php

Also, Agunimon and Lobomon have official erratas ( changing their inheritable effects from "one of your Digimon" to specifically "this Digimon" ). For more information, please check the official website: https://world.digimoncard.com/rule/errata_card/ 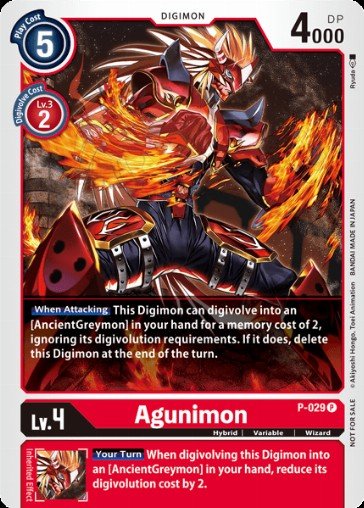 The AncientGreymon/hybrid archetype is a brand new archetype that gets released with Great Legends. This archetype revolves around getting benefits from Digivolving on top of your other hybrid Digimon ( and red tamers) concluding with the boss monster AncientGreymon ( https://digimoncard.io/card?search=BT4-113). However, it comes with a steep digivolution cost of 5 which can make it quite difficult to digivolve into it and it remains your turn  ( especially for Red ). This is where the new Agunimon comes in! With its "when attacking" skill, you're able to directly digivolve into AncientGreymon for 2 memory. Additionally, since the attack has already been declared, even if the 2 memory you use swings the memory gauge back to your opponent, your attack still resolves and becomes a 13k Security attack+1 ( or +2 if you have a hybrid rookie as one of its sources ).

Lastly, when your turn does end, Agunimon's effect deletes your AncientGreymon. This may seem all negative on the surface but, due to the AncientGreymon "On Deletion" effect, you're able to play a red level 4 or lower hybrid Digimon directly from your hand when it's deleted ( which can especially synergize with hybrid Digimon with "On Play" effects like Flamon https://digimoncard.io/card/?search=BT4-009 ). This Agunimon can add a lot of power to your AncientGreymon decks and I believe it will become a necessary staple for anyone trying to run it next set. 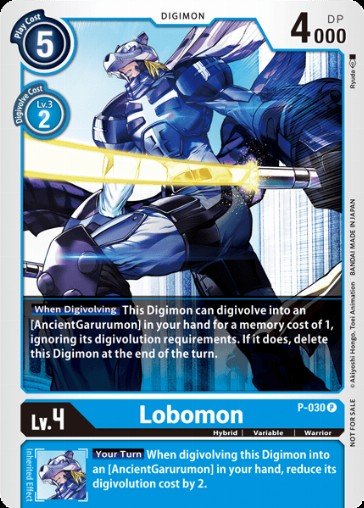 Similar to Agunimon, Lobomon directly supports the new blue leaningHybrid/AncientGarurumon archetype that appears in Great Legends.  Once again, this archetype really centers around gaining benefits from having hybrid/tamer sources but, unlike the red-leaning version, the boss monster for this version is AncientGarurumon ( https://digimoncard.io/card/?search=BT4-114 ). Though blue is a little bit better at controlling/gaining memory, the 5 digivolution cost for AncientGarurumon is still pretty steep and hard to justify paying most of the time. However, again like Agunimon, the new Lobomon promo lets you digivolve directly into Ancient Garurumon. But, unlike Agunimon, the effect triggers "when digivolving" and not "when attacking" ( but only cost 1 memory to do instead of 2 ). So, the ideal situation for this is to have 3 memory on your turn ( which you can help get to with Hammer Spark/ the Davis Tamer ), digivolve into Lobomon for 2 memory, and then digivolve into AncientGarurumon for 1 more memory.

Though the timing/memory cost is a little bit steeper than the Agunimon, I think AncientGarurumon can be a much stronger force to be reckoned with. When it swings, you are able to unsuspend 2 Ancient/Garurumon Digimon ( which can include itself! ). This can lead to a lot of burst damage in one turn, which can also be further increased if you already have a card like Beowolfmon on the field ( https://digimoncard.io/card/?search=BT4-030 ). Lastly, at the end of your turn, AncientGarurumon deletes itself but, just like AncientGreymon, you're able to play a level 4 or lower Blue Hybrid from your hand on deletion. I've been testing a lot of AncientGarurumon lately and I think the addition of this new Lobomon really gives the deck the power on consistency it needed. I definitely recommend trying the deck out and, additionally, here is a link to my personal version of it: https://digimoncard.io/deck/?deckid=311 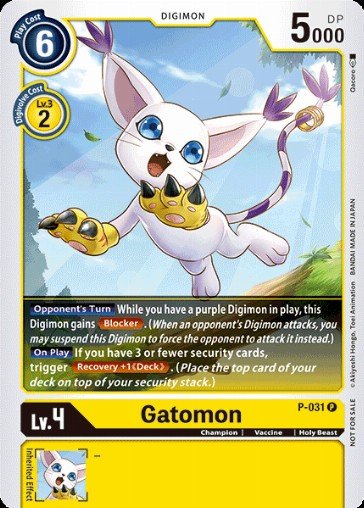 Mastemon ( https://digimoncard.io/card/?search=BT3-090 ) is one of my favorite cards in this game. So, when I saw Gatomon announced, I was absolutely excited! This card pairs perfectly with Mastemon and, immediately becomes one of the best cards to choose with Mastemon's digivolution effect. As long as you have 4 or less security when you digivolve into Mastemon, you are able to recovery+1 to compensate the security you lost AS WELL as get out Gatomon. Additionally, since Mastemon is Purple, Gatomon will also have blockers as long as Mastemon ( or any other purple Digimon ) stays on your side of the field. Now, the only question that remains with Gatomon is: "is it better than Lucemon?" ( https://digimoncard.io/card/?search=BT4-115 ).

Lucemon, despite having 10k DP, is actually still a level 3/Rookie Digimon and can also be played off of Mastemon's Digimon effect. Additionally, it allows you to Recovery+1 on the play as well. But, since Lucemon can't digivolve from or into anything, it can be a little tricky to get it into your trash and can be a little bricky. Because of this, I think Gatomon AND Lucemon are BOTH great additions to Mastemon decks and can be easily run in tandem together.

Mastemon decks can be rather tricky/unique to build due to having to balance the amount of yellow and purple you are running in the deck. However, I think Gatomon can greatly benefit both a yellow leaning or a purple leaning version of the deck. For a yellow leaning deck, Gatomon you can digivolve Gatomon on top of your yellow rookies and use it to help get to Digivolving into Mastemon. For Purple leaning decks, though you probably won't be able to digivolve into it, you can still hard cast it for 6 to gain recover 1 as long as you have 3 or less security. Additionally, if you have a purple Digimon out, which should be pretty easy to do, it will have a blocker as well ( which essentially means Gatomon can "prevent" 2 damage all by itself ).  To conclude, even if you still prefer Lucemon for your builds, I still think that a couple of copies of Gatomon will find themselves right at home in any BT4 version of Mastemon!

Going into Great Legends, right off the bat green seems to have the most direct support and access to the new Digi-Burst keyword. Because of this, I think the new Palmon promo feels right at home in this color. When Palmon is trashed due to activating Digi-Burst, it is allowed to give any of your Digimon ( not just the one that activated the Digi-Burst) Jamming for the turn. We've seen Jamming be a really effective keyword already in the BT3 Meta with the Imperialdramon archetype but, more specifically, Palmon's effect does especially well when paired with the new GranKuwagamon Promo ( https://digimoncard.io/card/?search=P-025 ).

This GranKuwagamon has a main-timing Digi-Burst-2 effect that lets you give any of your Digimon Security Attack+1 for the turn. Which, if you fully Digivolve him, you should be able to have enough sources underneath him to activate it twice. So, if your able to also Digi-Burst the Palmon with this effect, you can give a Digimon Security Attack+1 AND Jamming ( for technically 0 memory)! I think this can be incredibly powerful and definitely a combo worth building a deck around OR building into an already Digi-Burst heavy green build. In general, strong rookies like Palmon can be great investments ( especially since EVERY deck needs rookies ). Because of this, I think Palmon is definitely worth picking up if you're planning to play any green in the next set or two. 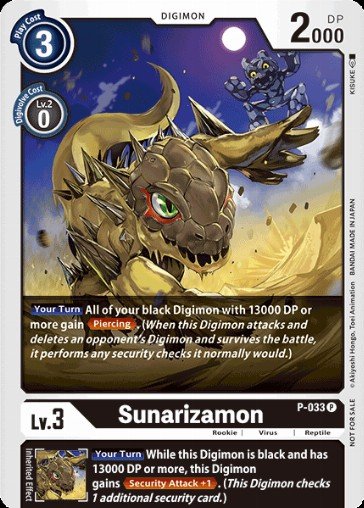 I'll be the first to admit that Sunarizamon is probably the most lackluster card in this set. However, I think that more speaks to just how powerful the other cards in this set are and he definitely does have some moments where he shines. To begin with, I think he's really unique in the way that his standard effect is good AND his inheritable skill is good ( whereas most other Digimon it is either one or the other ). Though Sunarizamon only benefits Black Digimon with 13k or more DP, black does have a couple of ways to increase the DP of their Digimon and they are also getting the new card Blastmon ( https://digimoncard.io/card/?search=BT4-075 ) in Great Legends.

Blastmon has a lot of burst potential with its 13k DP and Security attack+1 for just a 3 cost Digivolve. However, it does have a negative effect which, essentially, gives all of your opponent's unsuspended Digimon the ability to block its attack. That's where Sunarizamon comes in! With its "Your Turn" effect, you are able to give your Blastmon piercing ( essentially nullifying its negative effect of letting your opponent's Digimon block ). Additionally, if you have Sunarizamon as a source, you're able to pump him up to a Security Attack+2 and pressure your opponent to block his swing and give up one of their Digimon. Again, this is probably my least favorite card in the pack BUT it does have its uses and it's a must-have if you're running Blastmon. 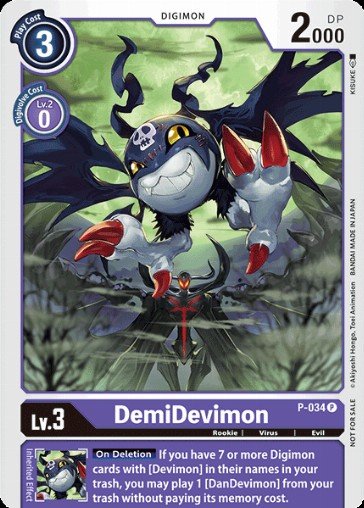 I think my favorite thing about DemiDevimon is, unlike the other promos which support existing archetypes, DemiDevimon creates a brand new archetype! "Devimon" cards ( ie cards that have Devimon as part of their name ) have existed in the game since the introduction of Purple and people are inherently running Devimon heavy decks already due to how powerful and generic the cards are already. This makes the new DemiDevimon extremely splash-able and easy to run for purple decks that can afford the room to run him.

Though DemiDevimon's trigger is a little specific ( Having 7+ Devimons in your trash after a Digimon gets deleted while DemiDevimon is one of it's sources ), Purple is the best color for cycling through cards and it makes it relatively easy to fill up your trash with the required Devimon cards. And, once you do, you're able to get out the newly introduced DanDevimon ( https://digimoncard.io/card/?search=BT4-088 ) for free! DanDevimon can be really annoying for your opponent, essentially having the potential to burn your opponent for damage and, if they pop him, they have to discard two cards from the hands. Additionally, if they DON'T pop him, you can easily digivolve into the equally annoying Millenniummon ( https://digimoncard.io/card/?search=BT2-083 ).

I think DemiDevimon is a lot of fun to build a deck around and, if you're looking for suggestions, I've been playing him with this build with some success as well: https://digimoncard.io/deck/?deckid=335

To conclude, I'm very excited about these new cards and I don't think I would be disappointed with getting any combination of these two of them in my own power up packs. I hope you guys enjoyed the read and I was able to help inspire you to try a deck or two with these new promos! Thanks for reading!