Yellow in BT5: Overtuned or Overhyped?

This is an opinon piece going over my personal thoughts of the power of yellow in BT5 as well as some suggested and potential errata/limiting/banning of cards that would help to put yellow in check for BT5. In general, this piece is not a call for action of changes that NEED to be mad but, instead, just my opinions on what can/could be changed. Comments/criticism/different opinions are more then welcome! 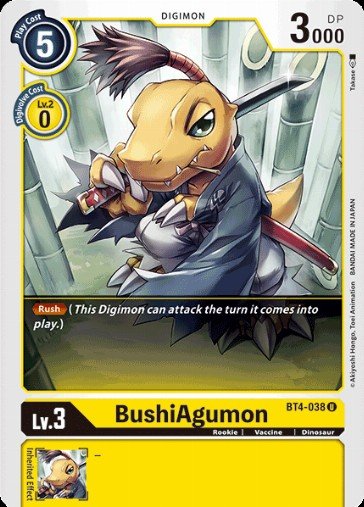 Before we start talking about BT5, I wanted to quickly demonstrate the amount of support and success yellow had in the BT4 meta. Pre-BT4, yellow was really lacking an identity outside of ShineGreymon. Shinegreymon is/was a powerful archetype but it has a rather linear playstyle and rigid decklist; you can normally tell when a ShineGreymon is coming out and play around it. Then, in BT4, yellow got an insane amount of generic support.

To begin with, they got 3 of the most powerful rookies in the game:  BT4-038 BushiAgumon, P-028 Pulsemon, and BT4-115 Lucemon. All of these cards are already strong if you pay their memory cost to play them but yellow ALSO had tools, such as BT2-039 Magnadramon and BT3-039 Angewomon, to play rookies for free.  Since any Digimon, regardless of power, can do security damage, getting a free Digimon out AS WELL AS being able to use their on-play effects, can generate an incredibly high tempo swing. Yellow also got the generic megas that it had been desperately missing in the last couple of sets in the form of BT4-048 WarGreymon and BT4-091 Chaosmon: Valdur Arm. Both of these megas have the ability to pop an opponent's Digimon as well as pressure your opponent aggressively. Lastly, yellow got a very important option card, BT4-104 Blinding Ray. Not only was it the play-extender that yellow needed but, if played correctly, it's "cost" of losing a security could actually put your security count low enough to meet the conditions for effects ( like Angewomon ). 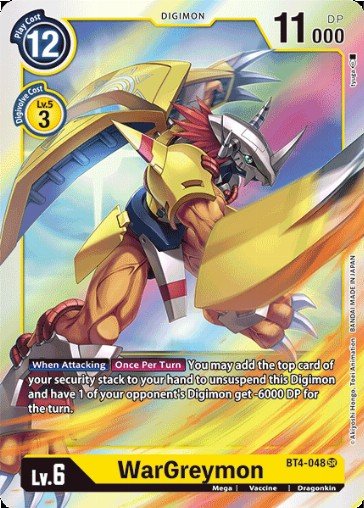 With all it's generic support, yellow WarGreymon was, in my opinion, the best archetype of the format. But, you don't have to take my word for it, you can also see it in the number of times it topped during BT4. Yellow WarGreymon was consistently in every official Bandai webcam event top 16, usually making a third to half of the spots in the top 16 in the BT4 meta, as well as the winning deck in a few. Unlike a rigid archetype like ShineGreymon, the backbone of its success really came from how flexible/reactive the deck can be. You could go tall into a mega, go wide with rookies, slow down the match with recovery effects and blockers, or even have a surprise lethal thanks to Blinding Ray and BushiAgumon. But, with how strong this playstyle already was, it's not like they were going to release even more support for it right? 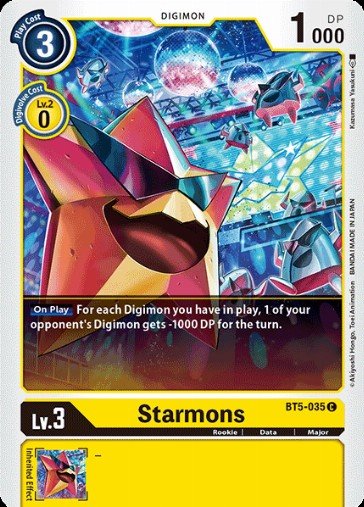 Oops. So yeah, they essentially made a new archetype that does everything that WarGreymon does but better with LordKnightmon as well as more generic support. Primarily, they got BT5-035 Starmons, BT5-042 Knightmon, BT5-045 LordKnightmon, and BT5-099 Spiral Masquerade.

Instead of making new cards to distance what Yellow WarGreymon was already doing, they doubled down and made an archetype that further supports the idea of yellow being able to spam Digimon with powerful On Play Effects. Though Yellow WarGreymon was powerful, it did have some weakness due to it only being an 11k Digimon, only being able to play rookies when it had Angewoman underneath it and the sometimes heavy cost of having to take security to get the -6k and restand ( though sometimes that was strictly a benefit ). 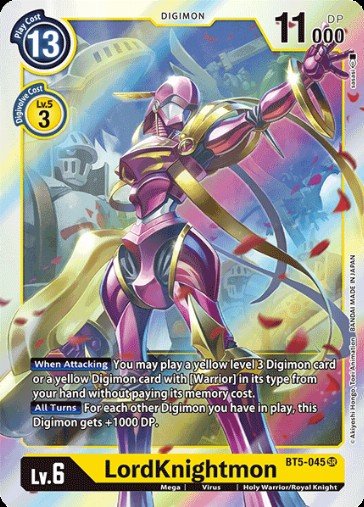 LordKnightmon, however, circumvents most of these shortcomings: it starts as an 11k and gains power during ALL TURNS depending on how many other Digimon you have out, plays rookies/warriors from hand for free with its own effect, and you don't need to take your own security to activate any of these effects. You do lose the inherent effect of being able to give something -6k like WarGreymon does BUT, with the Digimon you are playing for free when you swing, such as Starmons or Knightmon ( and can we just take a moment to realize how powerful it is that you can free play a level 5/ 7 cost Digimon that ALSO reduces  something by -4k ), you can still apply pressure WHILE generating board advantage. In general, the ability to reduce your opponent's board advantage while building your own board advantage is incredibly powerful all by itself.

This really boils down to why I think yellow is approaching or is at Tier 0 in the BT5 Meta; it is able to get additional benefits for what you want to be doing anyway. Specifically, you already want to be able to play a lot of Digimon/ build a wide board and, when you play those Digimon, they are able to activate their "on play" effects as well and generate more advantage. Because of this fact, I think Yellow needs some tweaking to its generic support cards to bring it down to the power level of other decks in the format.

To end this article, I want to outline two cards I think are problem cards for yellow as well as how I would adjust them to balance yellow's power in the meta. I'm usually not one to advocate for sweeping or extensive bans/limits/erratas ( nor would I be heartbroken if no change is made ) but these are more just suggestions and potential fixes that I could see being implemented in the next couple of weeks as the meta gets more solved. 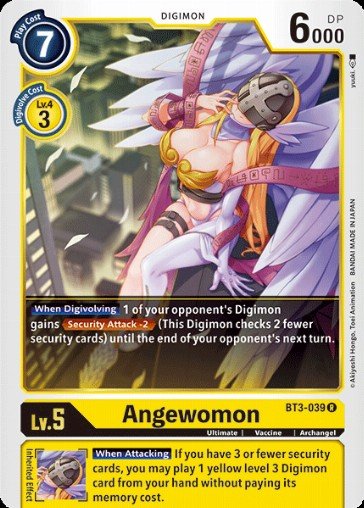 I don't think this card is incredibly broken but more of just undercosted/overtuned for what you are trying to do. However, since each Digimon on board can represent damage, a card like Angewomon that plays Digimon for free has to be carefully balanced or it risks the potential of quickly build wide and powerful boards. I think this was already being abused with WarGreymon and will only be further abused with LordKnightmon. Because of this, I could see two potential adjustments to Angewomon: limit it's inheritable to once per turn ( to prevent a twice swinging WarGreymon from getting the effect twice ) or limit Angewomon to 1 per deck. I think that, rightfully, Angewomon is often compared to the already limited BT2-047 Argomon and has a similar effect to it; both have an inheritable to play rookies for free. Though Angewomon has the additional ( though sometimes trivial ) cost of needing to be at 3 or less security, Argomon play its rookie suspended while Angewomon plays its rookies unsuspended and, in general, has a more impactful list of yellow rookies to play than green has. 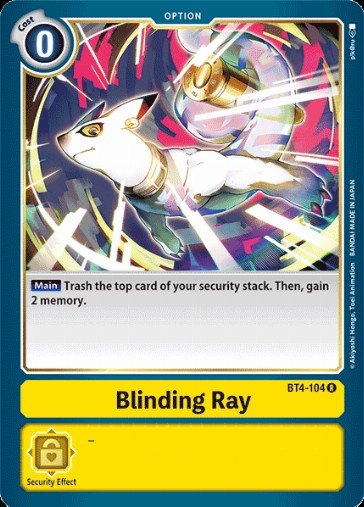 When I first saw Blinding Ray, I thought it was a rather unimpressive card: Sure you gain 2 memory but the cost of paying a security it pretty expensive and it didn't even have an effect in security. Now, 2 months later, I can say confidently that it's probably one of, if not the best, card in the game for yellow. Gaining memory/being able to have enough memory to keep it on your turn is one of the most powerful effects in the Digimon Card Game. Most other ways of gaining memory in this game require some sort of setup/sequencing/multiple cards to gain a single memory while blinding ray can just gain 2 memory all by itself. Though, once again, it does have the additional "cost" of losing a security, being able to reduce your security below 4 to meet skill requirements for cards like Angewomon AND gain 2 memory at the same time can be an incredible tempo swing. Lastly, based on the wording on the card, you are also able to use its effect while at 0 security for "free" turning it into a no-cost +2 memory. Personally, I would like to see blinding ray limited to 1 and, potentially, change the security loss to a proper effect so you have to pitch a security to gain the memory.

Yellow is in a really good spot in the BT5 meta. However, there is a line between a deck/archetype being good and being broken ( and that line is thinner/thicker depending on who you ask ). In my opinion, I believe that a small amount of balancing would go a long way to help see a more diverse meta and allow other decks to exist in a competitive capacity. Though the meta for BT5 is still early for NA/EU and I'm looking forward to seeing what decks emerge in the next couple of weeks as well as lowkey hoping the adjustments I'm asking won't be needed. Thanks for reading!

Hayden "TheEgman" Kaustinen is an avid card game player and makes content for the Digimon Card Game as well as Bandai's other card game Dragon Ball Super. Make sure to follow him on Youtube and Twitch for his other Digimon content!